Hello CreoPop Supporter,   We have now passed 1,500 backers on Indiegogo! Thanks for all your support. We could not have gotten this far without You!  On our side, we have been working around the clock and I’d like to give you some updates.   Ink Rally   Many of you have written to us about ordering extra inks. We have listened and will be doing a 72 hour ink rally starting on Monday 14 July. During this period we will introduce pledges for various ink packages. There will be special discounts given during the ink rally so do use the opportunity to pick up some extra ink. All ink packages will be inclusive of shipping so no need to add any extra for that. We’ll send you another update on Monday to let you know when the ink rally is live on Indiegogo. USD 200k Stretch Goal   As I write this we have passed USD 122,000 which is over 300% of our initial goal. We changed our stretch goals so that we will make 3 new inks at USD 200k.  We received more than 1,700 votes and the 3 most popular inks are: magnetic (514 votes), conductive (378 votes) and elastic (369 votes). We really want to reach the USD 200k level as CreoPop will become more exiting with new inks so please help us to spread the word by using the sharing functions below the main video on our Indiegogo page. 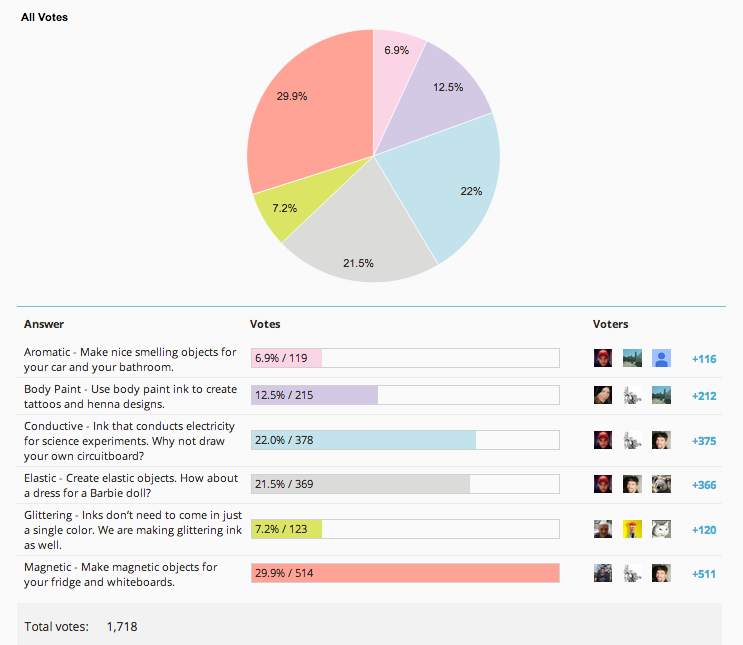 Pen R&D   The CreoPop pen you have seen is our third generation prototype. During the past 6 weeks, we have done extensive testing of the pen in the US. We have taken note of user feedback and have now commissioned our industrial design company to develop the fourth prototype.  We believe we can make the pen smaller and thinner which improves the user experience while allowing for the same amount of ink. We also want to make it easier to change ink cartridges. Further, we think we have found a way to speed up the initial ink extrusion speed to make it faster to start the pen. In addition, for our USD 100k stretch goal, we promised to include different nozzles for free. Our lab has currently developed 7 different types of nozzles that we are testing to see which ones work best. We are excited about these changes and will do another round of testing when we receive the fourth generation prototypes in August.  User feedback will determine whether this will be the final version or if we need to make further changes prior to mass production. As always, we will keep you updated about our progress.     Best wishes,   Andreas Birnik Co-Founder & Marketing Wizard @CreoPop Cool Ink. Infinite Creativity. Facebook Twitter YouTube

You Spoke, We Listened. Vote Now!

Many of You asked us to divide our Extra Inks pledges and to develop 3 inks once CreoPop reach $200,000 funding. And Yes, we are going to do that! Please click here to vote which 3 inks You want to be developed first and we will act accordingly! Please share CreoPop campaign with your friends and followers on Facebook, Twitter, Google+ so that we can reach our stretch goal together!